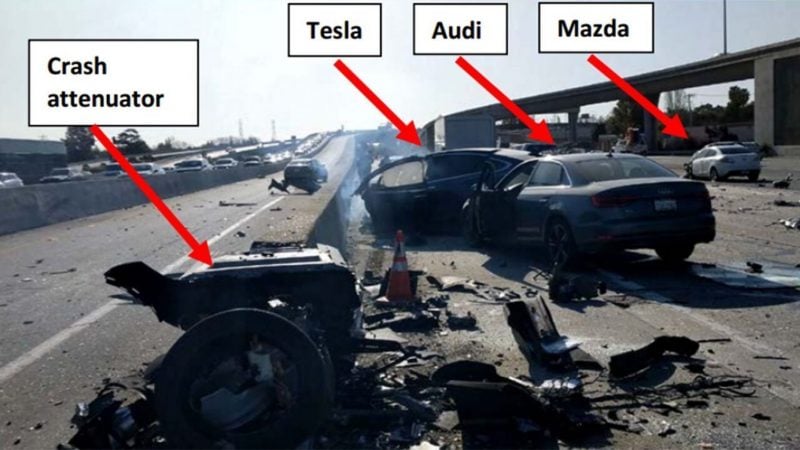 The first investigation was a 2018 car accident involving Walter Huang, an Apple engineer who was killed when his Tesla Model X on Autopilot slammed into a crash attenuator on US 101 in Mountain View, California. His Tesla Model X was traveling at 71 mph when it hit the safety barrier and caught on fire. While Mr. Huang was removed from the vehicle before it was engulfed in flames, he ultimately did not survive his injuries.

According to the NTSB, Mr. Huang’s smartphone was active moments before the crash. Logs recovered with help from Apple showed evidence that an app called Three Kingdoms was activated prior to the crash, but it’s unknown whether Mr. Huang was actively playing the game at the time. Mr. Huang’s hands were not on the steering wheel six seconds before the crash and no attempts to brake or evade the barrier were recorded.

The second NTSB investigation released today was a 2019 car accident involving Jeremy Banner who was killed when his Tesla Model 3 on Autopilot slammed into a tractor trailer on State Highway 441 in Delray Beach, Florida. His Tesla Model 3 was traveling at 69 mph when the tractor trailer crossed in front of it causing the Model 3 to drive underneath the trailer, shearing off the roof of the Model 3 killing Banner.

According to logs, Autopilot was activated 10 seconds prior to the crash and a recorded attempt was made to stop the vehicle less than a second prior to the accident, but it still went under the trailer.

While driver assistance features such as Tesla’s Autopilot allow drivers to rest their arms or legs while driving long distances, it’s important to note that these are not fully self driving systems and can malfunction. Even while engaged with Autopilot, drivers must continue to keep their eyes on the road and be prepared to take control when necessary.