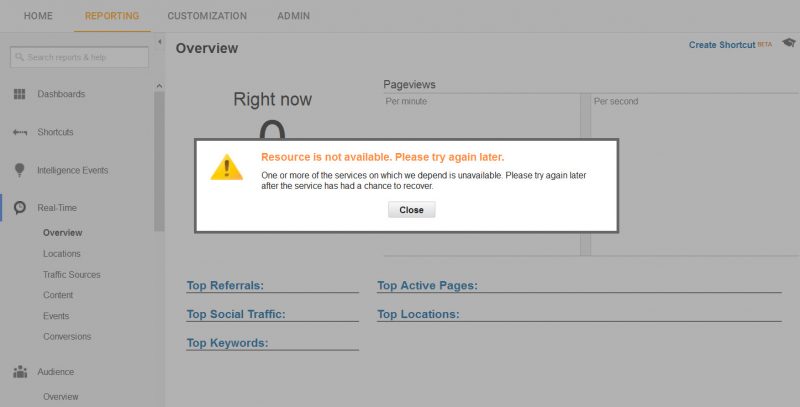 For webmasters out there trying to check their real-time site stats on Google Analytics, you may have noticed that it’s been having some issues as of late. In our case, we’ve seen seeing the message “Resource is not available. Please try again later.” If you’re having the same issue, don’t worry. You’re not alone.

Some users may be experiencing issues with real time reporting. We are working on a fix and expect to have everything back to normal soon.

After the issue started several days ago, quite a few webmasters have reached out to Google Analytics Twitter account and Google has confirmed that real-time functionality is indeed having issues.

Update: If you see errors accessing realtime reports in GA, a temporary workaround is to clear cookies or use an incognito browser window.

In the meantime, Google has posted a temporary workaround which includes clearing cookies or using an incognito browser window. I can also confirm that the Google Analytics Android app is working as well, so if you’re dying to know your stats in real-time, that’s a pretty easy way to do it.

We are working on a permanent resolution to this issue, which is expected to go live tomorrow. Apologies for the inconvenience.

Google says that a permanent resolution to the issue will be live tomorrow.