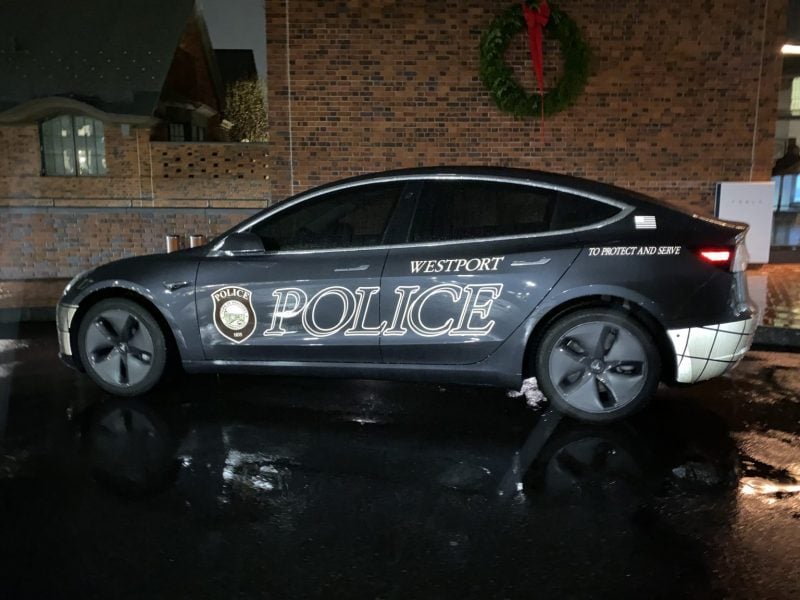 Even the not yet released Tesla Cybertruck has gotten quite a bit of enthusiasm from numerous police departments in the world. 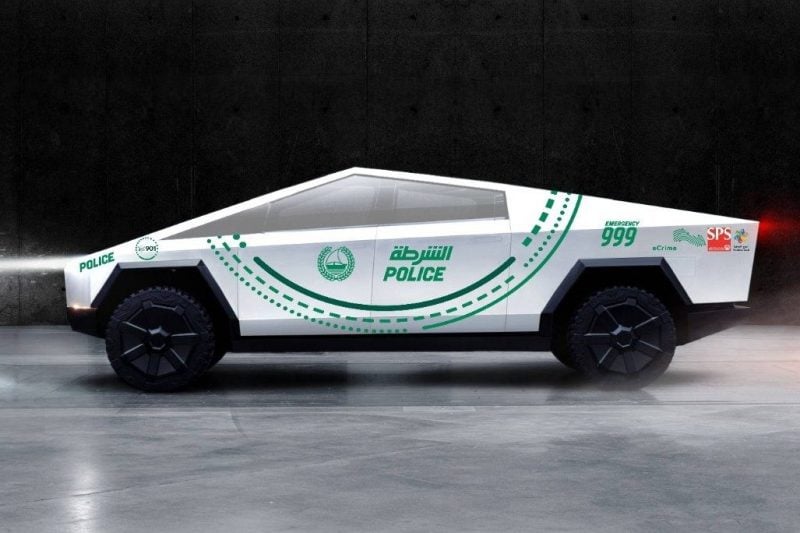 According to the Westport Police Department Chief of Police, Foti Koskinas, converting the Tesla Model 3 for patrol duty “went extremely well” and testing “exceeded expectations”. Unlike converting the typical Ford or Chevrolet sedans and SUVs, Tesla’s electric vehicles come with plenty of technology already included such as Sentry Mode, which allows drivers to record video utilizing the onboard Autopilot cameras. As the Westport Police Department was not going to be using Autopilot, it was able to work with Tesla to enable the department to use the cameras as the police dashcam. This has saved Westport Police Department approximately a $3,000 expense per vehicle and provides much better video quality not to mention multiple video angles. Police lights and sirens were also able to be wired directly into the Tesla Model 3’s massive battery, which saves the cost of a second large 12-volt battery and heavy duty alternator to support it. While this draws some power from the Tesla Model 3, it was reported that the range difference is negligible due to LED lighting’s power efficiency.

Of course, the costs saved aren’t just those that impact the department’s budget. Given that police cruisers operate 24/7, 365 days a year, that’s also significant carbon emissions savings per vehicle.

The Tesla Model 3 is also a superior chase vehicle thanks to its instant torque. A common scenario for police officers is to be pulled over to the side of the road and they need to quickly speed up to catch offenders when traffic rules are broken. As Tesla patrol vehicles can accelerate 0-60 MPH incredibly fast due to the electric motor, it allows police officers to pull over offenders quickly, reducing potential safety hazards to vehicle and pedestrian traffic from a drawn out pursuit.

It’s not clear if the feature is activated however, Tesla vehicles also provide navigation as well as visualization. Onboard navigation could help police find addresses they don’t readily know the location of while visualization provides a 360 degree ESP-like functionality that allows officers to have better awareness of their surroundings.

The Bargersville Police Department also pointed out that Tesla vehicles also provide a tactical advantage over their internal combustion counterparts. As the electric vehicles operate in near silence, police officers are better able to approach potential crime areas without being heard, which is important when conducting operations such as serving arrest warrants where the element of surprise could potentially save lives.

Not All Electric Vehicles are Alike

While Tesla is enjoying major success in equipping the law enforcement community, other pilot programs aren’t as successful due to vehicles that simply aren’t up to the challenge.

The Los Angeles Police Department for example took massive criticism after spending $10.2 million on a failed program to electrify the department’s patrol fleet with 100 BMW i3s for three years. The program was a massive failure as most vehicles simply sat in the garage with little to no miles on them at all. According to some department personnel, they are “…reluctant to use the electric cars because they can only go 80-100 miles on a charge.”

This of course shows the massive disparity in electric vehicles as even Tesla’s Model 3 Standard Range Plus is capable of 250 miles.

One of the things Westport Police Department is looking into is utilizing the Tesla onboard computer as the computer for police duty. While they haven’t quite figured it out yet, they are currently utilizing a tablet and modem in the meantime.

In the future, law enforcement sales could expand to be a large portion of Tesla’s business. Tesla could offer a police package which will include built-in applications for accessing police dispatch systems or allow police to integrate license plate identification technologies so police can be informed when vehicles around their vicinity have active warrants. The applications for helping law enforcement do their jobs more effectively and safely are endless.

With Tesla’s numerous cost, safety, and technological advantages, it won’t be surprising to see Tesla become one of the largest providers of law enforcement vehicles in the world soon enough.